The Blue Plains plant covers an area of about 153 acres with a normal capacity of treating 370 million gallons of wastewater per day. Image courtesy of Aecom.

The nitrification / de-nitrification facility at the plant's site will also be upgraded. Image courtesy of DC Water.

Groundbreaking ceremony for the Blue Plains water treatment plant upgrade was held on 17 May 2011. Image courtesy of DC Water. 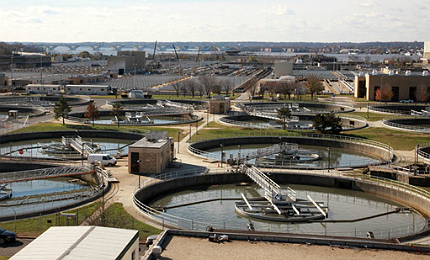 Construction is currently being carried out to further upgrade the Blue Plains Advanced Wastewater Treatment Plant (AWWTP) in Washington DC, US.

Commenced in 2011, the project is being implemented to meet the requirements of the National Pollutants Discharge Elimination System (NPDES), the nutrient load reduction goals of the Chesapeake Bay Agreement (CBA), and the seasonal nitrogen and phosphorus effluent discharge limits.

Upgradation activities scheduled for completion in 2015 will primarily witness the inclusion of a new biosolids processing main process train (MPT) incorporating the Cambi’s thermal hydrolysis process (THP) for the treatment of biosolids. It will be the first of its kind facility in the country and the largest of its kind facility in the world to implement this technology.

The District of Columbia Water and Sewer Authority (DC Water) is the owner of the plant, with CDM Smith and PC Construction as the main contractors.

The total investment for upgrading the plant is expected to reach $400m. The design allows for future expansion to include four more mesophilic digesters, additional centrifuges, and Cambi trains.

The Blue Plains Advanced Wastewater Treatment Plant (AWWTP) was constructed in the 1930s. It was initially managed by the Washington DC Government, and the District of Columbia Water and Sewer Authority (DC Water) took over the ownership in 1996.

The plant covers an area of around 153 acres with a normal capacity for treating 370 million gallons of wastewater a day and a peak capacity of one billion gallons a day.

The plant generates 1,200t of biosolids for use in agricultural fields. Discharges from the plant are emptied into the Potomac estuary, which links with the Chesapeake Bay.

Monitoring of activities at the plant site are carried out through the central control room (CCR) and three additional area control centres (ACC).

The plant upgrade involves implementation of the Cambi’s thermal hydrolysis process (THP) for the treatment of biosolids and construction of a combined heat and power (CHP) plant with a capacity of 13MWt. The expansion works will cover an area of six acres.

"The Blue Plains Advanced Wastewater Treatment Plant (AWWTP) was constructed in the 1930s."

Other construction work includes the installation of facilities for biosolid blending and screening, pre-dewatering facilities, and four digesters with a capacity of 3.8 million gallons each. The nitrification / dinitrification facility, pump station, post aeration tanks, mixers, and sluice gates at the plant site are also being upgraded.

Upgradation work is also being carried out to enhance the nitrogen removal facilities, which includes upgradation of the slurry walls, flood wall, tanks, and demolition of the existing lime building.

A three-storey building to enhance the capacity of dewatering Class A thermally hydrolysed-digested biosolids will be constructed. The building will incorporate an additional 16 new Belt Filter Presses.

The existing plant currently produces Class B lime stabilised biosolids using lime. The current project will upgrade the existing process and enable it to produce Class A biosolids.

The technology involved will cut down shipping of biosolids by 50%, reduce the use of energy from the grid by 30%, and cut down emissions from the plant by 41%.

The project will save Washington D.C. and the neighbouring areas about $10m in power savings and $10m in reduced sludge disposal costs on an annual basis.

The first step of treatment involves the removal of grit and debris. The water is then allowed to flow into primary sedimentation tanks where half of the sludge is removed.

The untreated water then flows into a secondary tank where oxygen is pumped into the tank so that organic matter can break down. Microbes also convert ammonia into harmless nitrogen gas.

Residual solids are then removed and the water is moved through sand filters that remove phosphorus and any remaining solids. It is then disinfected and dechlorinated before being discharged into the Potomac River.

Sludge from the primary sedimentation tanks is allowed to settle at the bottom and thickened through gravity. Sludge from the secondary and nitrification reactors is thickened using flotation thickeners.

The thickened sludge is dewatered and pathogens are removed using lime before being sent to agricultural fields.

The thermal hydrolysis process (THP) is a digestion pretreatment step that uses heat and pressure to kill pathogens in biosolids. It also breaks down biosolids so that they become more easily digested.

The process also helps to reduce odour during the treatment of organic materials. It involves the dewatering of sludge to dry solids by around 15%, which is then transferred to a storage tower. The dewatered sludge is sent to a pulper and then mixed and heated using recycled steam from the reactors and flash tank. Processed gases are then biologically broken down in digesters.

Thermal hydrolysis is allowed to take place in reactors at temperatures ranging from 165ºC to 170ºC for around 20 minutes. The steam is released and sent back to the pulper.

Sterilised sludge is flushed into the flash tank using a residual pressure in the reactor where the residual steam is flushed off and the steam recycled to the pulper after reducing the temperature of the sludge using heat exchangers and diluted water.

The THP process later goes through anaerobic digestion where the organic sludge is converted into biogas. The digested sludge is finally dewatered into biosolids by about 40% and used in agricultural land.

The contract to provide construction management services for the nitrogen removal facilities was awarded to Aecom. The five-year contract, which was awarded in March 2011, is worth $40m.

Spring Creek wastewater treatment plant is located about one mile east of the 26th Ward WWTP at Springfield in Illinois, US. The plant’s expansion began in 2009 and is expected to be completed by May 2014. It is expected to cost $125m.

Westside wastewater treatment plant, located near the Ohio River in Evansville, Indiana, US, was upgraded and equipped with a new biological aerated filtration (BAF) technology on 25 August 2009.