Staff Assistance for the Proposed Expansion

Water at the existing plant is treated through advanced techniques consisting of microfiltration, reverse osmosis and ultraviolet disinfection with hydrogen peroxide.

A microfiltration basin in the GWRS. 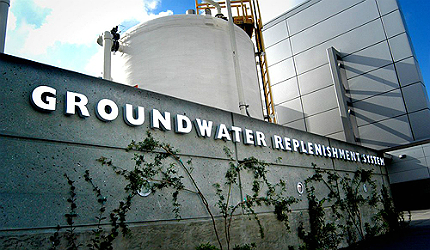 The Groundwater Replenishment System (GWRS) has been operating since January 2008. Jointly developed by Orange County Water District (OCWD) and Orange County Sanitation District (OCSD) in the US, GWRS is the largest water purification project of its kind in the world.

The state-of-the-art treatment plant has been in the planning phase since 1994 and construction began as late as 2003. The first phase of the plant cost $480m.

The GWRS won the ‘Membrane Facility of the Year’ award at the 2012 AWWA-AMTA Membrane Technology Conference held in Phoenix.

"The GWRS won the "Membrane Facility of the Year" award at the 2012 AWWA-AMTA Membrane Technology Conference."

The plant is equipped with a Siemens MEMCOR submerged membrane system, and is capable of supplying 86 million gallons a day (MGD) of water. This membrane system is made up of 26 compact units that can treat water five times more than the formal purification system established in the same footprint.

Each unit of the membrane system is fitted with 608 hollow fibre membrane modules, which, in turn, are set up in racks. A filtration pump provided with each unit takes in water from the membrane fibres.

Nearly half of the refined water is transferred to OCWD recharge facilities in Anaheim, California, and any remaining water is injected into Orange County’s seawater barrier for its expansion.

In April 2010, a bill was introduced to authorise $26m through federal funding for the expansion of the GWR system. The OCWD board of directors approved the second phase of expansion of in March 2011. The California Department of Water Resources awarded a $1m grant for the project in October 2011.

"GWRS is the largest water purification project of its kind in the world."

The expansion increased the plant’s treatment capacity by 30MGD. It involved Memcor CS membrane modules, ancillaries, control system upgrades and related electrical works. After expansion, the capacity of the existing MF membrane system increases from 86MGD to 120MGD. The plant production capacity was increased from 70MGD to 100MGD.

Under a $16m pre-selection contract awarded in March 2010, Siemens was asked to supply a hollow-fibre membrane treatment system. Commissioning of the expanded system and installation of membrane modules were monitored by Siemens. The Siemens membrane system, at the time of its installation in the existing plant, was one of the largest in the world.

Design of the proposed expansion was taken up by Black & Veatch in July 2009. Staff assistance was offered by Separation Process.

In May 2011, a construction management contract was awarded to Parsons. The scope of the contract included a range of services, from document control to commissioning oversight and operational start up services. McCarthy Building Companies acted as a general contractor.

To fulfil the future water demand for agricultural, industrial and indirect potable use, it was decided to expand the GWRS and the plant was constructed with scope for future expansion. The project provides an additional 31,000 acre-feet a year (AFY) of water supplies, bringing the total to 103,000AFY, sufficient for 850,000 people.

The source water, which is secondary treated sewer water, is first micro-filtered at a microfiltration unit.

The water is then filtered through RO, which removes salts, viruses, pesticides and most organic compounds by passing the forced water through thin plastic membranes. Water quality recovered after this step is near-distilled.

In the final stage, the water is treated with UV light and hydrogen peroxide as a precautionary measure.

The Fillmore Wastewater Treatment Plant (WWTP) is a state-of-the-art, zero-discharge water recycling facility (WRF) located in the City of Fillmore in the state of California, US.