Chun Wo Construction and Engineering Company 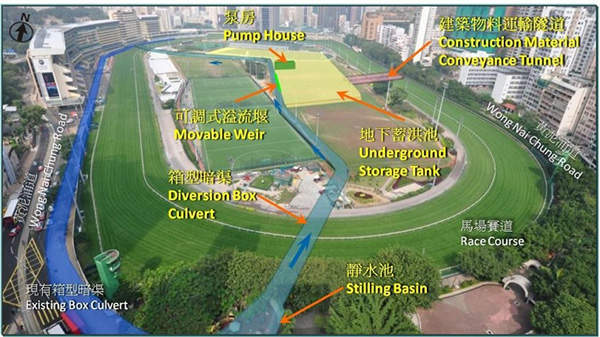 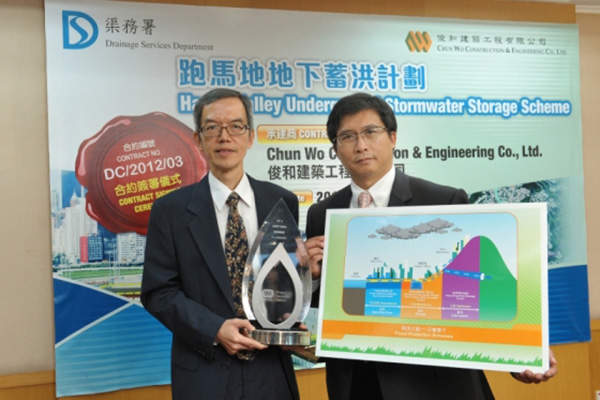 Officials introduce the planning, design and construction of the Happy Valley Underground Stormwater Storage Scheme during the contract signing ceremony. 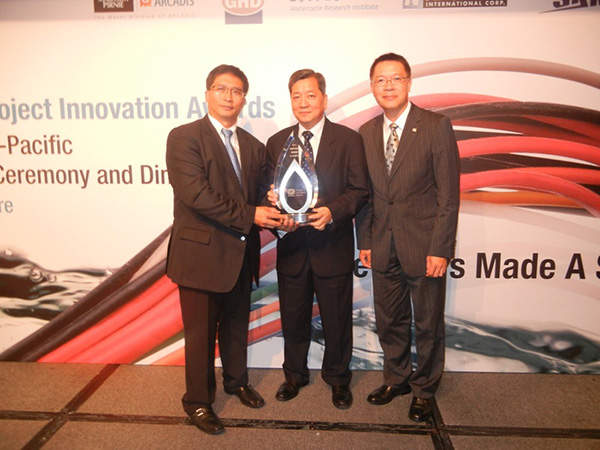 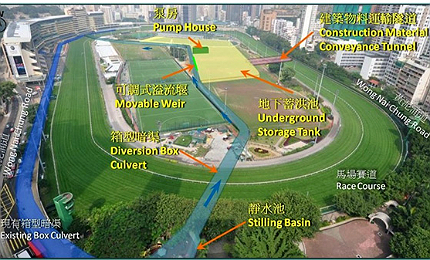 The project is being developed with an investment of HK$1bn ($128.9m). The hydraulic study and design works for the scheme were carried out by Black & Veatch.

The first phase of the project is scheduled to come online in 2015. The entire project will be realised by 2018. The project won the International Water Association’s (IWA) Project Innovation Award for the East Asia region in the Planning Category in 2012.

The project forms part of a comprehensive plan of DSD to control flooding in Hong Kong. DSD has completed projects worth HKD 11bn ($1.4bn) in Hong Kong and plans to invest about HKD $10bn ($1.2bn).

"The hydraulic study and design works for the scheme were carried out by Black & Veatch."

Stormwater during heavy rainfall will initially enter the inlet structure and then be channeled to the diversion culvert. Excess runoff from the culvert will then be conveyed to the storage tank using the movable crest overflow side weir. Water from the storage tank will be pumped and released back to the existing storm-water drainage system on normal days.

The design calls for the use of a movable crest overflow side weir system incorporating supervisory control and data acquisition (SCADA) for monitoring tidal levels and avoiding spillover.

The project is the first of its kind in Hong Kong where integrated one-dimensional, two-dimensional and three-dimensional hydraulic modelling techniques, as well as three dimensional Computational Fluid Dynamics (CFD) modelling, are being applied simultaneously.

The design for the project was carried out keeping environmental concerns in the forefront. The design, which calls for the use of the automated monitoring system for controlling the stormwater flow diverted from the upstream drainage system to the storage tank, enables the use of a smaller storage tank.

The pump house will consume less energy and construction time, while cost will also be cut down due to the shallow tank design.

A catchment area covering about 130ha upstream of Happy Valley will be served by the project.

"The project forms part of a comprehensive plan of DSD to control flooding in Hong Kong."

Works at the project site necessitated the construction of an underground manhole for access. It also involved the laying of two underground pipes in which a fully enclosed conveying belt system was installed for carrying construction wastes to the car park, where it is being transported away using a minimum of 15 dump trucks per hour.

The storage tank will be founded on 533 H-piles which will be placed in sockets in the bedrock to address uplift pressure.

The pump house will be a single-storey building covering an area of about 500m². The twin cell box culvert will measure 400m in length and have internal cell with dimensions of two metres in height and four metres in width.

Other ancillary works at the project site will consist of carrying out the electrical and mechanical works, modification of an existing box culvert, and construction of a stilling basin and a fan room. The project will also involve the remediation works for the sports pitches affected, and landscaping works.

Tai Po Water Treatment Works, in Hong Kong, was opened in 2003. The Water Supplies Department (WSD) of Hong Kong officially announced the award of contracts for the expansion of the plant in February 2013. The expansion works are expected to be completed by 2017.