The ongoing expansion of Tai Po water works will increase the storage capacity of the Primary Service Reservoir at Butterfly Valley from 40,000m3 to 120,000m3. Image courtesy of Audit Commission.

The contract for the expansion of the Tai Po Water Treatment Works and ancillary raw water and fresh water transfer facilities was signed on 6 February 2013.

Black & Veatch designed the expansion of the Tai Po water works in 2009. 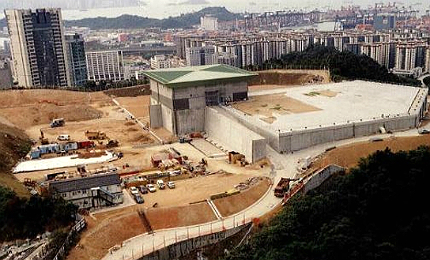 Tai Po Water Treatment Works, in Hong Kong, was opened in 2003. The Water Supplies Department (WSD) of Hong Kong officially announced the award of contracts for the expansion of the plant in February 2013. The expansion works are expected to be completed by 2017.

The current project will primarily include upgrading existing facilities and constructing additional water treatment components at the plant site. The project is expected to generate about 1,330 jobs. The expansion will alleviate the load from the Sha Tin Water Works located nearby.

"The expansion contract, worth $419m (HK$3.25bn), has been awarded to the China State-Atal joint venture."

The design works for the existing Tai Po Water Treatment Works commenced in 1995, with Black & Veatch acting as the consultant. Construction began in 1998 and the plant became operational in 2003 with an initial treatment capacity of 250,000m³ per day.

The plant covers an area of about 10ha. It was constructed with an investment of $4.6bn and currently serves about seven million people within Shenzhen and Hong Kong.

The project won the Global Grand Prize in the Design Project category of the International Water Association (IWA) Project Innovation Awards in 2006.

The plant applies advanced water treatment technology, such as biofiltration, ozonation and dissolved air flotation techniques, to treat the raw water, which is then pumped via a 12km-long tunnel to a primary service reservoir at Butterfly Valley before being supplied to the municipalities of Kowloon and the central and western districts on Hong Kong Island.

The first stage of treatment involves a mixture of air and water to lift coagulated solids to the water surface for removal. The second step involves biological treatment where ammonia and manganese are removed. The final stage involves disinfection using chlorine. Ozone and granulated activated carbon filters are also used when deemed necessary.

WSD made an announcement in June 2009 to further expand the Tai Po Water Treatment Plant. The consultancy contract to design and supervise the construction works was again awarded to Black & Veatch.

"It was constructed with an investment of $4.6bn and currently serves about seven million people within Shenzhen and Hong Kong."

The project involved upgradation of the existing facilities and construction of additional water treatment facilities at the plant site. It also increased the pumping capacities of the raw water and fresh water pumping stations.

The expansion will also witness the placing of about 900m ancillary fresh water mains with diameters ranging from 900mm to 1,800mm in Sham Shui Po and Kowloon City.

A two-year programme of work began in 2006 to improve Beijing’s Bei Xiao He wastewater treatment plant ahead of the 2008 Olympics.