The £20m Sludge Treatment Centre (STC) is an integral part of Southern Water's strategy to deliver even cleaner seas to the Sussex coast. 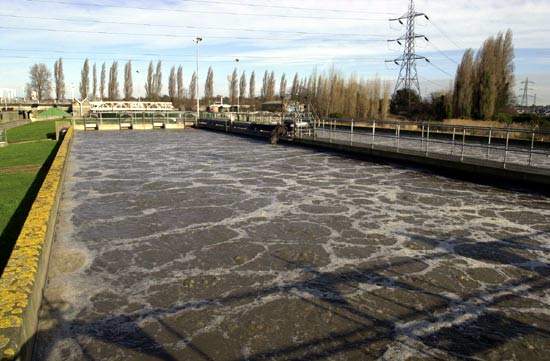 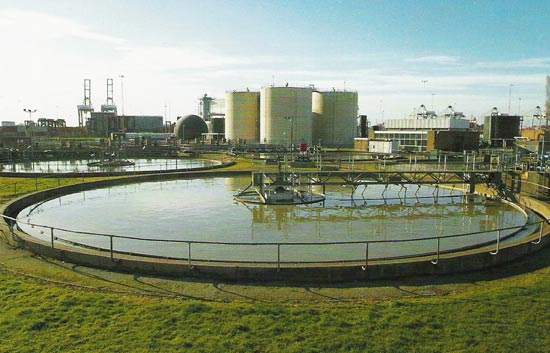 One of the six primary tanks, which between them remove around 65% of the influent solids. 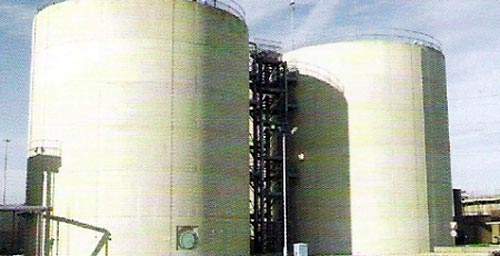 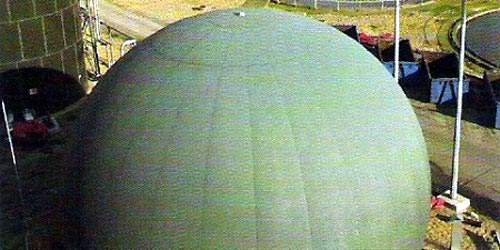 The gas recycling system; biogas produced during digestion is reused onsite to heat the digesters themselves to their operational temperature and to fuel the drier. 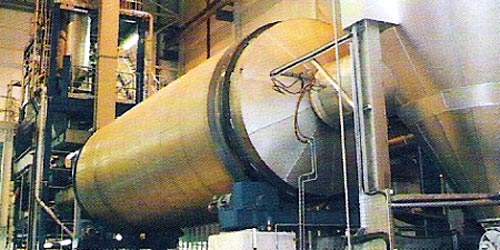 After separation by centrifuge, the sludge cake is dried in a thermal drier. 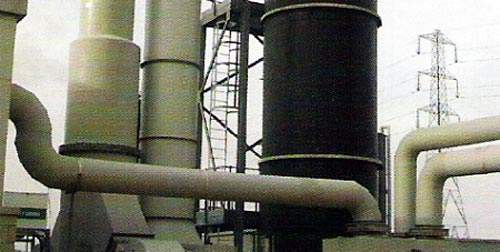 The plant uses state-of-the-art odour control systems; smells from the sludge treatment are collected and chemically treated before release. 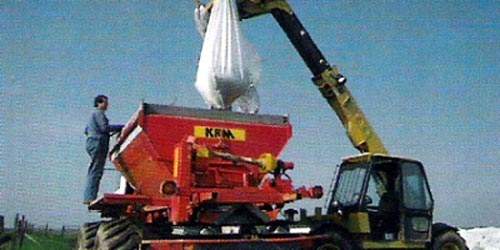 The dried fertiliser product is bagged and distributed for beneficial agricultural / land applications under the name "Bestway". 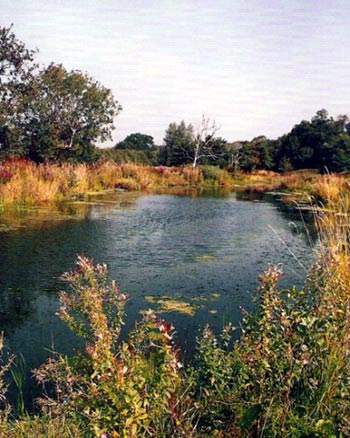 The conservation area at Millbrook has proven to be a very valuable habitat for wildlife. 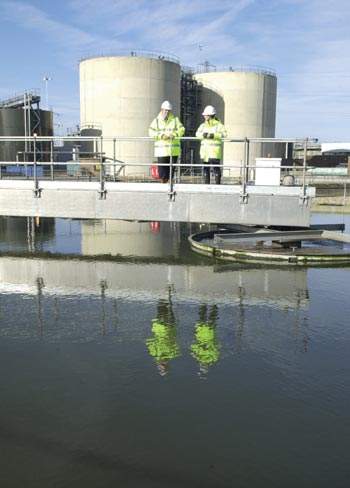 Wastewater treatment at Millbrook consists of largely traditional elements; the sludge digesters form the background, with final settlement tanks to the fore. 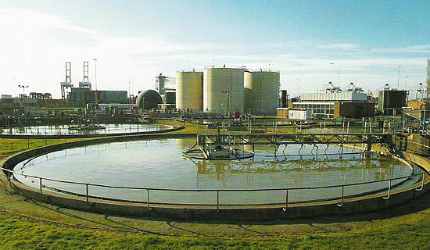 In March 2004, five years after Southern Water’s Millbrook Wastewater Treatment and Recycling Centre was completed, it was featured as one of a number of key European plants visited by a delegation from the China Municipal Engineering Association.

The party was interested in many of the plant’s features, particularly the approaches used for treatment and in the storage and management of excess stormwater.

The plant currently treats wastewater from 138,000 people in the Southampton area and sludge from an additional 112,000, which is imported from the region’s smaller WWTPs.

A total of 14,000t of sludge is converted into 10,000t of fertiliser each year, which is sold to a variety of outlets for beneficial land use.

Work to upgrade the Millbrook site to provide a regional sludge treatment centre began in May 1997, and was completed in early 1999 at a project cost of around £20m.

A second upgrade project which commenced towards the end of 2011 is currently in progress. It is being implemented by Southern Water, with an investment of £25.8m and is slated for completion by 2014.

Work includes the introduction of a new process to remove nutrients, such as nitrogen, from the wastewater. The main elements of the project are a new 92m long sludge plant, two 33m diameter final settlement tanks and the laying of one mile long new pipelines. The project will include the use of about 3,000m of new cable ducts, 11,000t of reinforcement steel, 9,000m3 of concrete and two 50t cranes.

The project is being implemented in two phases. As of October 2012, 40% of the first phase has been completed. On completion of the upgrade project, the plant is expected to treat 73 million litres of wastewater daily from 140,000 people. The construction work has been contracted to 4Delivery.

The Millbrook treatment works was first built in 1936 and subsequently extended in 1965 to provide the area with treatment complying with the Royal Commission standard which applied at that time. An increasing population led to a further extension in 1991.

The next phase of the plant’s development arose in response to the EU Urban Wastewater Treatment Directive, which heralded the end of the historic practice of disposing of the sludge at sea, in a licensed area six miles south-east of the Isle of Wight.

Establishing the wastewater treatment and recycling centre to enable sludge to be treated centrally was the first of a number of measures to safeguard sea quality throughout the region – a programme of improvements that remains ongoing.

Wastewater treatment consists of largely traditional elements. Debris, grease and grit are removed from the influent at the inlet works, with six primary tanks subsequently removing around 65% of solids.

"The project is being implemented in two phases. As of October 2012, 40% of the first phase has been completed."

A pipeline running beneath the River Test connects the Millbrook plant to the Slowhill Copse WWTP. This pipeline conveys separated solids from the Slowhill Copse works itself, which serves much of the New Forest area, as well as sludge brought by barge to Slowhill from the plants at Woolston and Portswood. The sludge input is blended and then thickened before entering the anaerobic digestion (AD) phase.

Three sequencing batch reactor (SBR) tanks, each equipped with gas collection and recycling systems, stabilise and reduce the organic matter present. The AD phase has an average detention period of 14 days, after which time the material is separated by centrifuge, the resultant solid cake is dried at around 90°C in a thermal drier. Biogas produced during digestion is reused onsite to heat the digesters themselves to their 35°C operational temperature and to fuel the drier.

The resulting dry granulated product is marketed for fertiliser use on land, under the name "Bestway", having been used with considerable success, principally on golf courses and in land reclamation projects. In addition, it helped produce bumper crops of wheat and sunflowers on Southern Water’s own trial farm near Horsham. The plant also employs state-of-the-art SCADA and odour control systems.

One of the major factors behind the European legislation, which drove the establishment of the recycling centre, was the desire to improve the cleanliness of coastal waters.

As a result of this project and others in Southern Water’s ongoing multimillion pound investment programme, every beach in Southern Water’s region met European standards on bathing water quality in 2003 – the first time the 79 beaches had achieved a 100% pass rate.

The allied and ongoing programme of work is extensive. Plans have been announced for a new £200m environmental improvement – the Brighton and Hove Area Wastewater Treatment Scheme – to deliver even cleaner seas to the Sussex coast.

The project will provide state-of-the-art treatment for the 95 million litres of wastewater generated every day by the 250,000 residents of Brighton and Hove, Woodingdean, Ovingdean, Rottingdean, Saltdean, Telscombe Cliffs and Peacehaven.

A similar programme is planned for Margate and Broadstairs at a cost of £80m. In addition, work began in 2004 on a £14m tunnel scheme to upgrade the wastewater treatment system in Lewes, East Sussex, and improve river water quality, while work has also started on an £8m scheme to safeguard the quality of drinking water in Southampton and Eastleigh.

Southern Water is the plant owner / operator and was responsible for financing the project. The main contractor was Purac, who supplied their proprietary ‘Puractor’ SBR technology. Civil work was undertaken by Harbour & General, while Montgomery Watson provided the design.

Coca-Cola’s Wakefield facility is the largest of six major bottling plants the company operates in the UK. The plant recently completed an upgrade of its water treatment facility – with Severn Trent and Norit working to provide a comprehensive purification and recovery system – which increased influent quality and upped supply capacity.

The Lee Tunnel project is the first of the two tunnelling projects being undertaken as part of the Thames Water London Tideway Improvements scheme. The second is the Thames Tunnel. The scheme aims at presenting a cleaner River Thames by 2020.

The updating of storm water arrangements in Whitehills in the spring of 2004 signalled the final stage of a radical modernisation of wastewater treatment along the Moray Firth which had begun three years earlier.