Contract A and B 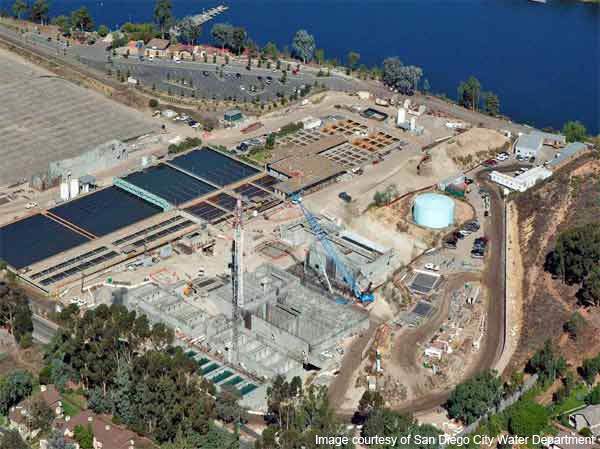 Aerial view of the Miramar plant. A fast-growing population coupled with changes in regulation and the age of the facility – it first entered service in 1962 – made the upgrade and expansion essential to meet the city's future water supply needs. 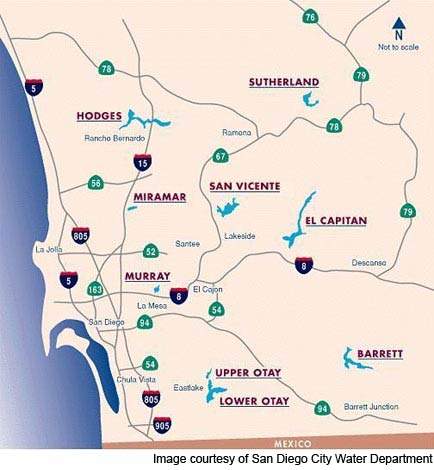 Map of the lakes and reservoirs of the San Diego area. Lake Miramar is one of nine reservoirs managed by the city's Operations Division and the WTP, one of three responsible for supplying 1.3 million local inhabitants. 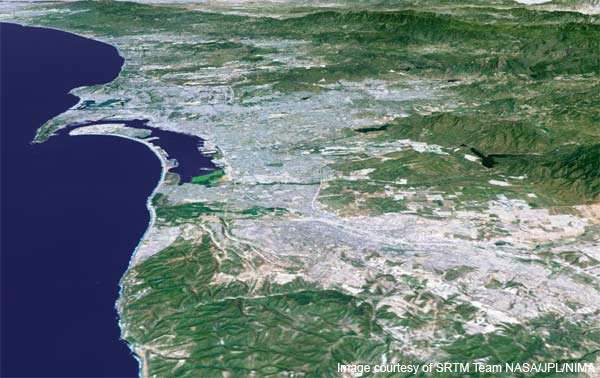 Computer-generated perspective of the San Diego area viewed from the south, showing the influence of topography on growth. 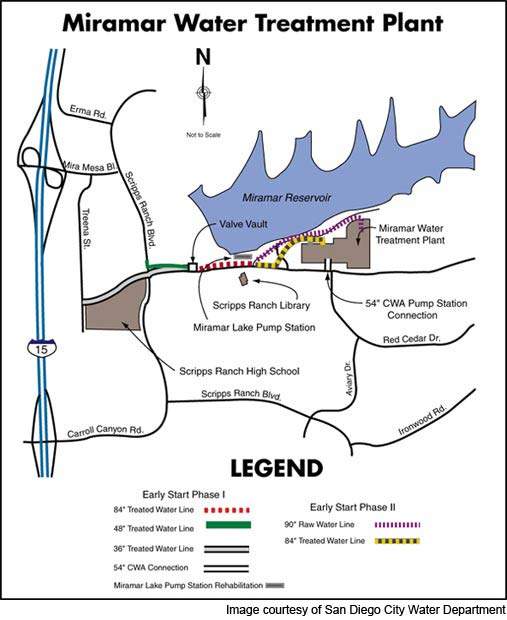 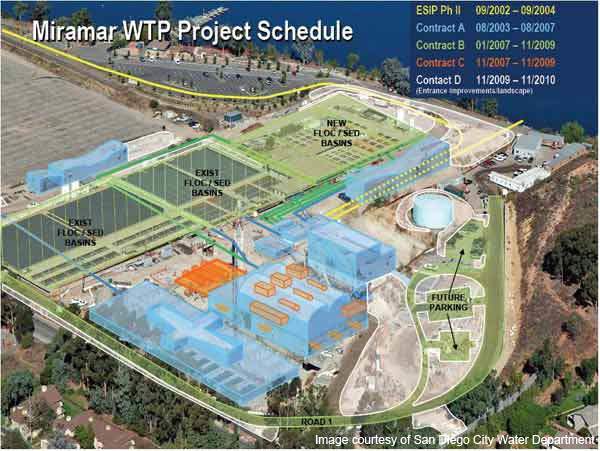 The Miramar project elements and schedule superimposed on the existing plant. The work increased the plant's daily treatment capacity and provides a state-of-the-art facility with a 75-year design lifespan. 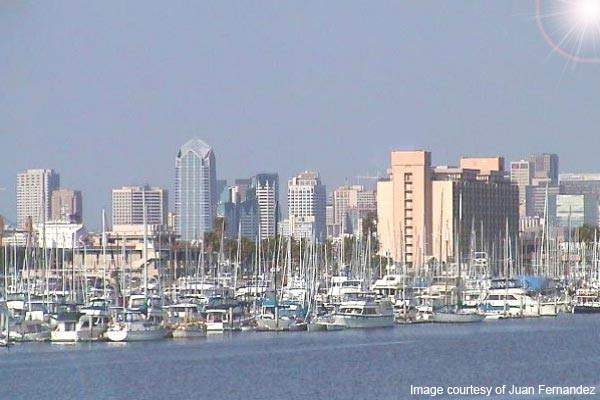 San Diego from the waterfront. With a current population of more than 1.3 million and predicted to approach two million by 2030, since July 1998, the city has been implementing a major capital improvements programme to meet the future needs of its inhabitants. The Miramar project forms part of this scheme. 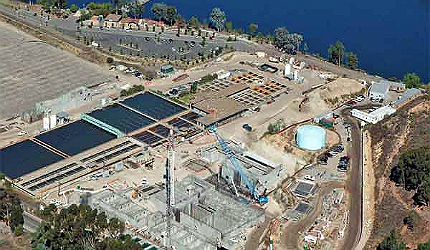 The Miramar water treatment plant upgrade and expansion project forms a major component of the San Diego City Water Department’s capital improvements programme – initiated in July 1998 – to increase capacity and reliability to meet the current and future water needs of its fast-growing population.

The work will increase the plant’s daily treatment capacity by 285,000 cubic metres to 815,000m3/day and provide a state-of-the-art facility with a 75-year design lifespan.

Implemented in six component phases, the scheme includes a new rapid mix facility, de-aeration basins, disinfection and chemical facilities, new and refurbished administration buildings, flocculation and sedimentation basins, wash-water recovery system and water filters. In addition, new pipelines have been laid and other preparatory improvements have been undertaken outside the WTP site itself.

The project cost will be slightly more than $200m, with the plant’s upgrade and expansion accounting for $171m of this budget.

The upgrade and improvement project has received recognition as an "outstanding civil engineering project" by the San Diego section of the American Society of Civil Engineers.

"San Diego’s capital improvement programme has the stated objective of providing a safe and reliable water treatment and distribution system."

A combination of growing demand, ageing infrastructure and regulatory requirements acted as drivers on the project.

The City of San Diego’s current population stands at more than 1.3 million and it is projected to rise by a further 600,000 by 2030. The Miramar plant is the sole source of drinking water to the 500,000 inhabitants of the northern section of the city – itself the fastest growing region in San Diego County. With peak demand in this service area exceeding the plant’s existing 530,000m3/day capacity, to avoid a local water shortage, an upgrade was planned by 2008.

Ferric chloride and an organic polymer are added in the coagulation step; chlorine forms the primary disinfectant, ammonia being subsequently introduced to react with the chlorine to form chloramines providing a residual disinfectant throughout the distribution system. The water is also treated with potassium permanganate to improve taste and odour, and sodium hydroxide to adjust the pH, before being supplied.

However, having first been brought into service in 1962, much of the facility and its associated equipment were approaching the end of their useful lifespan and were required to be either rehabilitated or replaced.

These factors, coupled with changes in drinking water regulations and the California Department of Health Services compliance order – issued in 1997 – make the expansion and upgrade of Miramar essential to the city’s future ability to supply treated water.

The project has six constituent elements – a two-phase programme of early start improvements that spanned 1998-2005, followed by four further contracts which take the work through to its completion towards early 2013.

"A combination of growing demand, ageing infrastructure and regulatory requirements acted as drivers on the project."

Phase I of the early start improvements involved the construction of distribution pipelines, the valve vault and tunnel, together with modifications of the raw water pump station. In phase II, the distribution pipeline was connected to existing clear-wells and mass grading work was undertaken to prepare the plant for subsequent construction. In addition, a new Diego County Water Authority feed pipeline and temporary chemical facilities were also provided as part of this phase.

Commenced in the summer of 2003, the first contract formed a major construction component of the overall project. It comprised the provision of 12 new filters, pumps, rapid mix facilities, a de-aeration basin and an ozone structure, together with chemical and main administration buildings. This part of the scheme was completed in December 2007. The work also included the provision of a new chlorine facility, electrical and mechanical systems, including instrumentation and control systems.

The second contract began in November 2007 and was completed in the first quarter of 2010 with an investment of $15m. In addition, four flocculation / sedimentation basins were constructed in place of the old basins. The contractual scope also included the demolition of the old filters, flocculation / sedimentation basins, operations building and other structures which were not required.

Construction on the third contract started in May 2008 and was completed in 2010. The scope of work in this phase included the installation of saddles and concrete pads for the tanks, including conduits. The installation of the ozone equipments formed a major part of this contract.

The last and fourth phase of the project started in late 2011. It is expected to be completed in early 2013. Under this contract, landscaping, construction of the entry gate, guard house and security access and controls will be undertaken. Drainage, fencing and retaining walls will also be constructed.

"The City of San Diego Water Department is the plant owner / project sponsor."

San Diego’s capital improvement programme has the stated objective of providing a safe and reliable water treatment and distribution system, offering state-of-the-art facilities at the lowest possible cost to its consumers. A number of the new design features are intended to make this possible.

With around 90% of the raw water arriving at the city’s WTPs drawn from the Colorado River or northern California and conveyed along a series of pipelines, pump stations and conduits, large quantities of air can become entrapped in the micro-bubbles which form. The new de-aeration basins – constructed as part of the first contract – have been included to aid the removal of this air, which will greatly enhance downstream water filtration performance.

The upgraded plant will include ozone disinfection.

In order to arrive at a final design, which was robust, cost effective and efficient, computational fluid dynamics modelling was used to investigate the flow characteristics of the proposed contactor – largely examining the straightening vanes, which were intended to reduce dead zones.

Computer simulations performed with and without these vanes revealed that they had no effect on residence time – enabling them to be omitted from the final design and saving around $300,000 in construction cost.

In addition, the new waste equalisation basin will improve the backwash and the ‘filter-to-waste’ cycle – typically around five to ten percent of the total flow – and up-to-the-minute technology monitors water levels and regulates pressure within the distribution system.

The City of San Diego Water Department is the plant owner / project sponsor. Archer Western worked on the early start improvements and the first contract. In August 2003, the $81.3m contract A was awarded to Western Summit Constructors. The company was also selected for the $50.4m contract B. The construction contract for the $17m contract C was awarded to Archer Western Contractors. The construction contract for contract D was awarded to T.B. Penick & Sons for an estimated contract value of $2.1m. COM provided computational fluid dynamics modelling for the ozone contactor design.