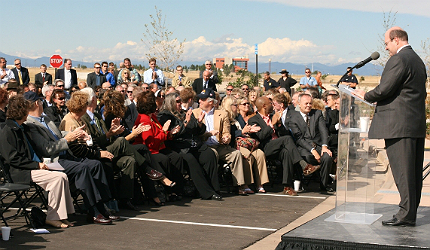 Prairie Waters Project is a huge water supply scheme, implemented by the city of Aurora in the state of Colorado, to supply the South Platte River’s water to the city. The construction work on the project began in 2006. It was completed in October 2010 with an investment of $653m.

CH2M HILL, the main contractor, delivered the project two months ahead of schedule and at a reduced final cost. The initial budget estimated for the project was $754m.

Background to the Prairie Waters Project

"CH2M HILL, the main contractor, delivered the project two months ahead of schedule and at a reduced final cost."

The project was undertaken following the drought conditions that the city of Aurora experienced for a few years, beginning from 2000. The water reserves available to the city became minimal and were not enough to serve the huge population.

The scarcity of water in Aurora, along with very limited alternatives to its water problem and the expected future population growth, necessitated a sound solution to meet the future water needs of the city. Prairie Waters Project was chosen from about 50 proposals that were brought forward to tackle the problem.

The implementation of the project called for various rigorous stakeholder agreements, approval and completion permits, and cases dealing with the use of land for the project.

The pipes used for the project range from 60 to 79 inches in diameter. The steel pipes were coated with polyurethane, mortar-lined and provided with cathodic protection system. The pipes were enclosed in 15 casings of about 84 inches diameter.

The three pumping stations, with a conveyance capacity of about 21,000 cubic feet, are rated at 6,000HP.

The raw water reaching the Prairie Waters Project goes through various steps before finally being delivered to the residents of Aurora.

The water is pumped from 17 wells located within the confines of the South Platte River Banks and piped to the ARR basin, where it is first naturally purified by allowing to flow through sand and gravel.

The water from the ARR basin is then piped through the 34mi pipeline to the three pumping stations. It is further sent to the Peter D. Binney Purification Facility located near the Aurora Reservoir.

The purified water from the Binney D. Purification Facility is sent to the Robertsdale Tank and Pumping station for distribution.

Various legal works associated with water rights for the project were undertaken with assistance from Deere & Ault Consultants.

The permissions regarding the construction of tunnels in various sensitive areas were sought through the guidance of Brownstein.

Defence budget cuts and a first drop in US spending since 1998 ensured military spending in 2011 didn’t exceed $1.738bn.

Small-scale water purification systems can be the ideal solution for areas with poor water treatment infrastructure.