Member municipalities (through bulk water sales from the GVRD)
Expand 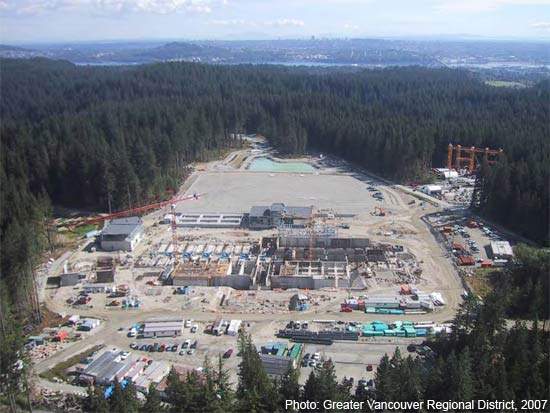 Construction of the new two billion litres a day plant was completed in 2008. 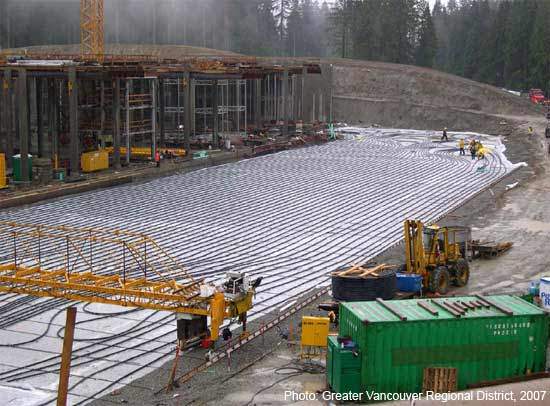 Geothermal piping was laid at the clearwells during mid-2005. 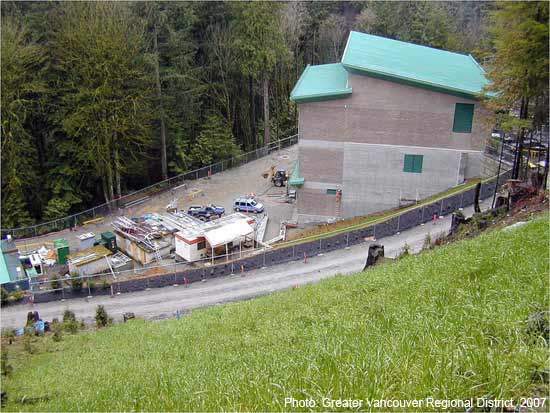 The Capilano pumping station. Raw water from the Capilano reservoir will be pumped to the plant along one of the pair of new tunnels being constructed as part of the project, treated water returning by gravity along the other to enter the Capilano distribution system. 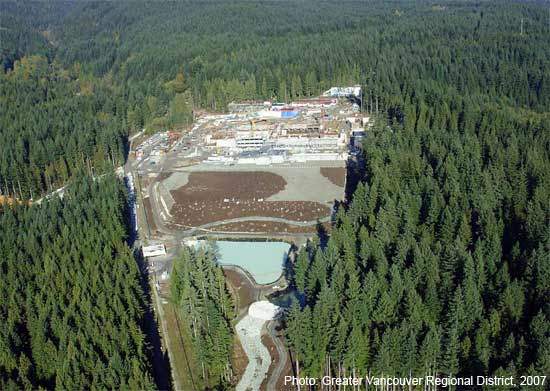 Aerial view of the filtration plant; it occupies an 8ha site. 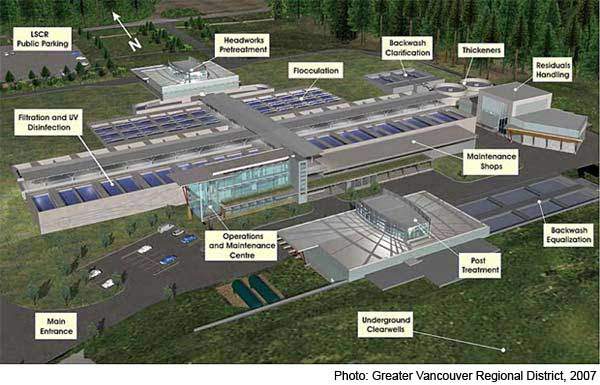 Artist's rendition of the filtration plant. 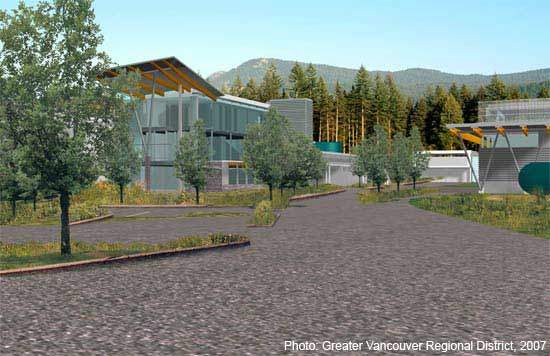 Artist's rendition of the filtration plant elevation. The design has incorporated a range of innovative features to maximise its energy efficiency and reduce its environmental impact in accordance with the GVRD's Sustainable Region Initiative. 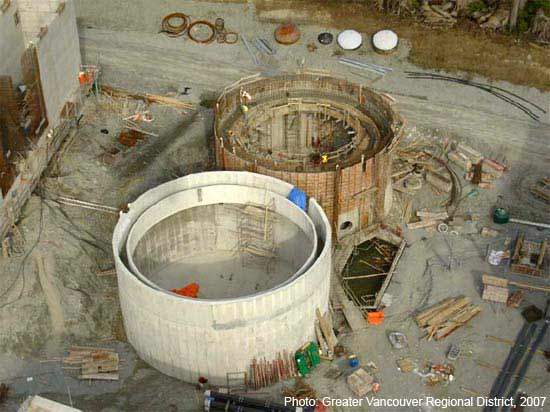 Aerial view of the thickener tanks, which were constructed in 2007. 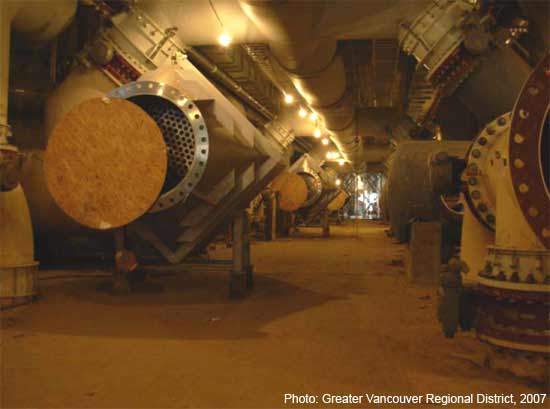 UV units in the filter pipe gallery. The plant is the largest ultraviolet disinfection facility in the world. 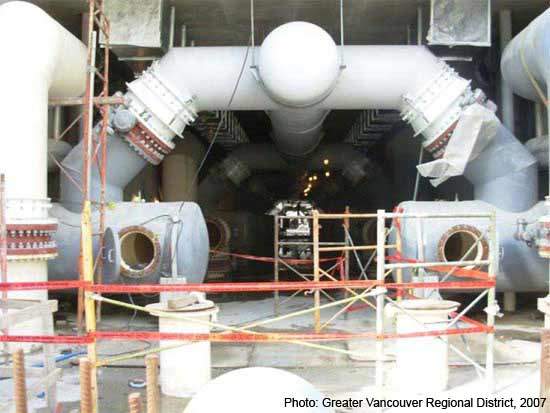 The filtration pipe gallery. The project was largely driven by the need to reduce turbidity. 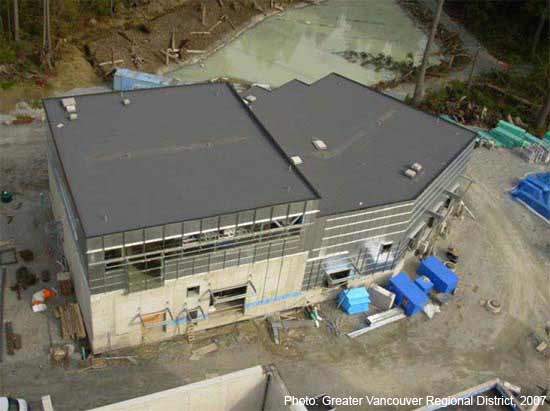 The residuals management building from the air. 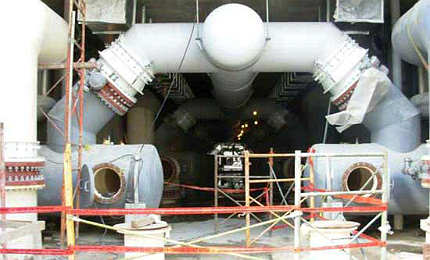 With a daily capacity of 1.8 billion litres, the Seymour-Capilano water filtration plant in Metro, Vancouver, Canada, became operational in May 2010. It supplies safe and clean drinking water to the city’s residents.

The Seymour-Capilano plant is Canada’s largest water filtration plant and one of the biggest of its kind in North America. It is uses the world’s largest ultraviolet disinfection facility and showcases a series of innovative features to maximise its energy efficiency. Extensive use has also been made of sustainable and environmental technologies in its design and construction.

In addition to the filtration and UV plants themselves, the project also includes a 16,000HP pumping station, an energy recovery facility and break head tank, an electrical substation, two 3.7m-diameter tunnels extending just more than 7km and new water storage clear-wells. An allied programme of work provided a new water main and undertook a major upgrade to the Seymour Falls Dam to meet current seismic standards.

The project budget was $820m, which attracted partial external funding. The Canadian Government and the Province of British Columbia jointly invested $100m in the plant.

"Sustainable and environmental technologies were extensively used in its design and construction."

The project was driven by tighter federal and provincial quality requirements and the regional medical health officers’ demands for lower levels of turbidity, coupled with a predicted population increase of 800,000 during the next 20 years.

To meet these challenges and the increased demand, the Greater Vancouver Regional District (GVRD) decided to build a filtration plant in 2001 under the design-build-operate, public-private partnership mode (locally termed P3).

However, after a large public campaign, this contract was set aside to enable the new plant to remain in public hands.

The facility, which has been built on an 8ha site in the Lower Seymour Conservation Reserve, treats water drawn from both Seymour and Capilano reservoirs. Water arrives from Seymour, approximately 11km to the north, along the existing 2.3m-diameter main, while the new twin tunnels convey Capilano water to and from the plant, the return arm being gravity-fed.

The plant design itself is largely conventional. Water from the two reservoirs enters a rapid-mix head works, where coagulant is added, before entering flocculation basins and subjected to a slow-mix process. The subsequent direct filtration phase uses a 2m-deep filter dual-media bed, consisting of anthracite and sand, and from here, the filtered water enters the UV disinfection unit.

Flowing into treated water storage clear-wells, the pH is then adjusted before the water enters the Capilano and Seymour distribution networks. UV disinfection was selected for the plant using mercury vapour lamps installed inside quartz protective sleeves, principally because of its proven effectiveness against both giardia and cryptosporidium. However, although the plant uses UV as its primary disinfection regime, secondary chlorination remains a feature, to guarantee the safety of the potable water travelling through the municipal distribution systems.

Design of the Seymour-Capilano filtration plant

The plant connects Seymour and Capilano water resources through underground twin tunnels. The twin tunnel is located at North Vancouver, British Columbia. Each tunnel is 3.8m in diameter and 7.1km in length.

It took six years to excavate, one year to install, and two years to fully operate the tunnels. The excavation and installation work was completed in 2012. The twin tunnels became fully operational in May 2015, marking the completion of the Seymour-Capilano filtration project.

With the plant itself being in a conservation reserve, unsurprisingly the project was planned in strict accord with the GVRD’s Sustainable Region Initiative. As a result, it has drawn heavily on sustainable building, environmental technologies and best practices.

These includes the use of EcoSmart concrete, which reduces the greenhouse gas emissions of cement production and uses industrial by-products, such as fly ash, to reduce the demand for landfill.

Green roof technologies have been incorporated into the roofs of the clear-wells and filtration plant and measures have been put in place to reduce storm water run-off. An energy recovery facility and the associated break head tank recovers energy from the water in the gravity-fed tunnel between Seymour and Capilano, reducing the pressure of the water prior to its reaching the distribution system.

This recovered energy is used to generate electricity, which is either used by the GVRD or sold to the local power company.

The plant also uses ground source energy to heat and cool the entire facility, maximises its use of daylight and natural ventilation, and conserves energy and water. The site is re-planted with appropriate native species.

The project was sponsored by GVRD. Emerson Process Management provided the plant’s digital automation, with instrumentation and controls from RTS and control hardware supplied by Norpac. AMEC delivered the facility training programme.

Greater Vancouver Water District (GVWD) is the owner of the project. Pacific Liaicon & Associates act as a consultant for the Seymour-Capilano water facility. Seymour-Cap Partnership, a joint venture of Frontier-Kemper, J F Shea, and Aecon, received a contract from Metro Vancouver to complete the twin water tunnels for GVWD in 2010.

Saskatoon, a city located in the prairie province of Saskatchewan in Canada, is eight years into a ten-year expansion programme intended to prolong the useful life of its wastewater treatment plant (WTP) by a quarter of a century. To this end, water and wastewater projects accounted for some C$44m of the city’s proposed 2008 capital budget.