Governmental Approval on the Tideway Tunnel

Governmental Approval on the Tideway Tunnel 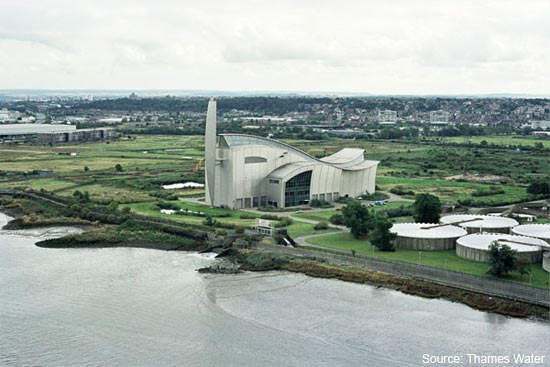 Crossness – one of three major WWTPs to be improved. Between them, Beckton, Crossness and Mogden serve seven million people. 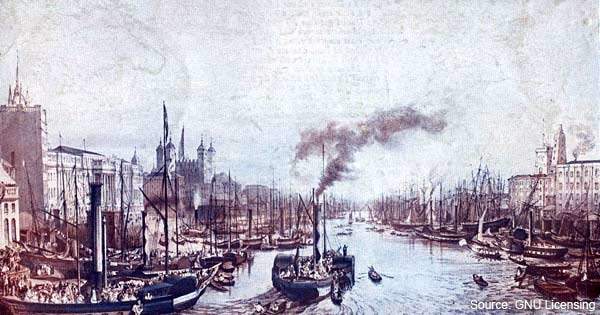 “The Pool from London Bridge: Morning" from a lithograph by William Parrott, 1841. It was not until the middle of the 19<span class="sup">th</span> century that the city gained a real sewer system. 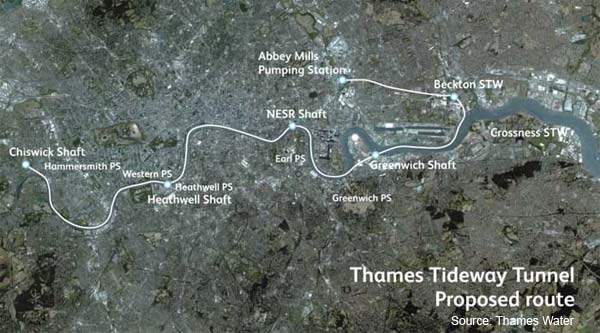 Proposed route of the Tideway Tunnel – a storage-and-transfer tunnel nearly 35km long lying 60m below the city for most of its route. 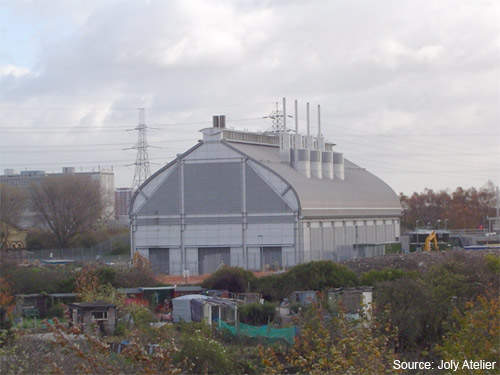 The Abbey Mills pumping station; an additional spur tunnel will run from here to Beckton. 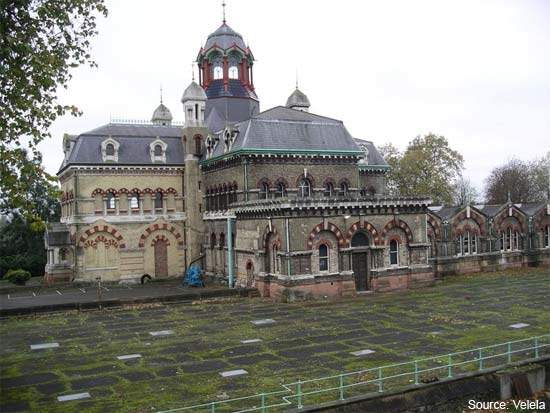 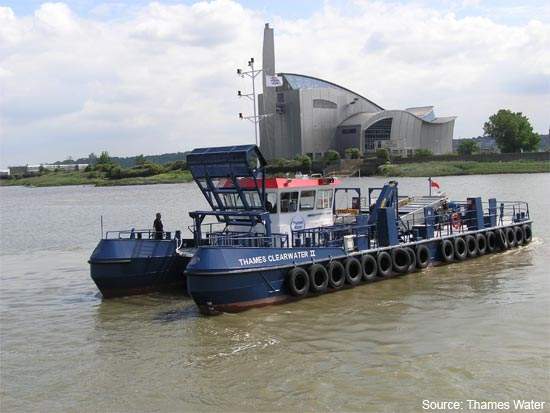 The Clearwater II opposite Crossness – one of the skimmer boats used to remove floating litter from the river after heavy storms. 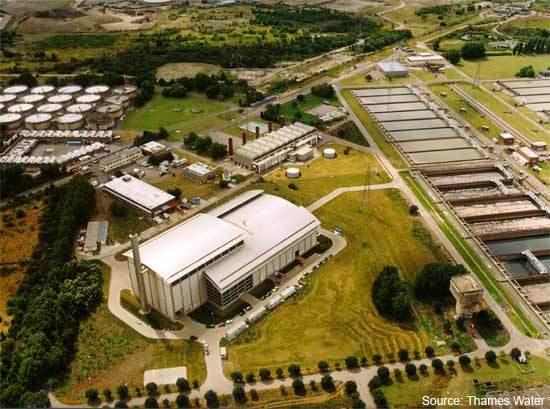 Aerial view of the Beckton plant. 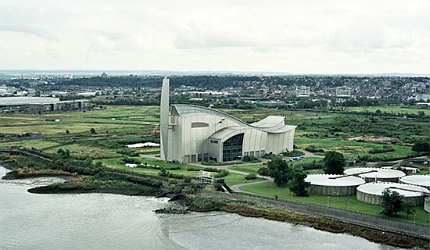 The Thames Tideway scheme – coupling improvements to London’s three main wastewater treatment plants (WWTPs) with the construction of a storage-and-transfer tunnel nearly 35km long – forms one of the city’s most ambitious wastewater projects since its first sanitation system in the mid-19th century.

With an eight-year estimated construction schedule, the tunnel is intended to improve the capacity of London’s sewerage system and help prevent sewage discharge into the River Thames. In addition to reducing the potential for wet weather overflows, the work will allow more wastewater to be treated to a higher standard, in line with water utility Thames Water’s policy aim of making the river cleaner and improving the quality of both water and the environment. Annually, 32 million cubic metres of untreated sewage is discharged into the river.

The improvement work, at the plants in Beckton in north London, Crossness in south London and Mogden in west London, will require an investment of some £550m, spread over nine years. The tunnel is estimated to cost around £3.6bn, with full completion provisionally scheduled for 2020.

The sewage treatment works improvement project was started in summer 2010. The Beckton and Crossness upgrades are due for completion in 2014 and the Mogden upgrade in 2013.

"Thames Water first proposed a combined sewer overflow back in the early 1990s – an idea which subsequently gave rise to the Tideway Tunnel scheme."

London’s lack of sewer provision made cholera epidemics commonplace throughout most of the early 19th century and although proposals to remedy the problem were put forward in 1856, it was not until ‘The Great Stink’ of 1858 that the idea of a modern sewerage system took root.

Joseph Bazalgette – chief engineer of the Metropolitan Board of Works – designed an extensive underground system to divert wastewater, which included constructing interceptor sewers between 1859 and 1865, to serve both the north and south of the Thames. The scale of this Victorian scheme was enormous, requiring the excavation of more than 3.5 million tons of earth, nearly 700,000mm³ of cement and around a third of a million bricks to complete.

Despite major improvements in the 20th century, London’s physical expansion and population growth has placed increasing demands on system capacity – particularly in wet weather, when high rainfall can overwhelm the city’s sewers and treatment works.

An overflow system diverts the excess flow to the Thames, but this can also lead to untreated sewage being discharged directly into the water. With an estimated 20 million cubic metres of untreated sewage – albeit diluted with surface water run-off – entering the river annually, the situation became increasingly unmanageable, particularly in the light of the demands of the Urban Wastewater Treatment Directive.

For some years there has been discussion about how to increase the carrying capacity of the system. Thames Water first proposed a combined sewer overflow back in the early 1990s – an idea which subsequently gave rise to the Tideway Tunnel scheme.

The Thames Tideway Strategic Study (TTSS) – a multi-agency group comprising of Thames Water, the Department for Environment, Food and Rural Affairs (Defra), the Environment Agency and the Greater London Authority (GLA), with water service regulator Ofwat as an observer – was formed in 2000 to examine and evaluate possible solutions to the problem. In due course, they recommended a 34.5km storage tunnel to intercept the overflows at the river and convey the wastewater for treatment.

"Thames Water owns and operates the plants, being a member of the TTSS, along with Defra, the EA, GLA and Ofwat."

After a subsequent request by the UK Government to examine possible ways of addressing the problem more quickly – particularly in view of the 2012 London Olympic and Paralympic Games – TTSS presented their findings in February 2005, followed up by a supplementary report in the November.

After extensive consideration of all the suggested options and sub-options, approval was given to a scheme to build a tunnel some 32.2km-long from Hammersmith to Beckton, with an additional spur tunnel running the 5.5km from Abbey Mills to Beckton. The tunnel will connect with the Lee Tunnel at Stratford.

A nine-month exploratory programme to analyse the ground conditions of the proposed tunnel began in July 2009 by sinking a borehole on the Thames riverbed, outside the Palace of Westminster. The first phase of public consultation was started in September 2010 and closed in January 2011, while the second phase of public consultation was undertaken from November 2011 to February 2012. Finalised proposals for the project are expected to be submitted in early 2013. Initial construction work is expected to start in 2015 / 2016, with completion scheduled for 2020.

The tunnel will lie up to 67m below ground for most of its route, starting out at a depth of 40m at Hammersmith in the west and dropping to around 80m as it travels east to Beckton. Tunnel Boring Machines will create the tunnel and a series of strategically placed access shafts, with excavated material being transported by barge along the river to minimise road haulage. Once completed, it will be lined to isolate it from the surrounding earth and eliminate the chance of seepage. 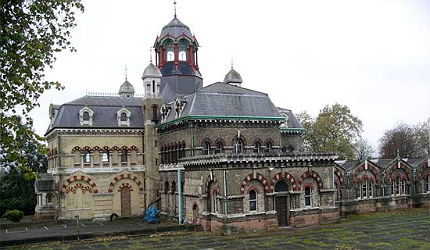 A site selection methodology was developed in May 2009, taking inputs from local authorities and other organisations potentially affected by the London Tideway Tunnels. The 34 most polluting combined sewer overflows (CSOs) will be connected through the tunnel. The methodology for the CSOs has proposed six main shaft sites and five intermediate shaft sites.

The shafts are expected to be about 25m internal diameter with depths ranging from 40m in west London to 75m at Beckton sewage treatment works in east London.

There will be a single pump out shaft – at Beckton, the UK’s largest WWTP – and a total storage volume in excess of 1.6 million cubic metres.

The Lee Tunnel project is the first of the two tunnelling projects being undertaken as part of the Thames Water London Tideway Improvements scheme.

Increasing the treatment capacity of the WWTPs is intended to provide sufficient slack to enable greater volumes of rain-swollen influent to be fully treated when necessary, while ensuring that the dissolved oxygen levels in the river are not adversely affected. This will also allow the frequency of storm tank usage to be reduced, which itself further reduces the likelihood of overflows.

Designing the programme – which includes improving screening and grit removal, primary and secondary settlement, aeration and odour control – took projections of future growth into account. The figures for dry weather flow (DWF) and flow to full treatment (FTFT), for instance, reflect expected population increases up to 2021- five years more than had previously featured in earlier schemes.

Other measures that Thames Water are implementing to support their wider programme of improvements include introducing new ‘skimmer’ boats to remove floating litter from the river and ‘bubbler’ vessels to pump extra oxygen into the water after heavy storms.

Thames Water owns and operates the plants, being a member of the TTSS, along with Defra, the EA, GLA and Ofwat. Jacobs Babtie were responsible for the review of the TTSS recommendations on behalf of Ofwat.

Rotork provided automation systems for part of the plant upgrades with Hydro International supplying their Zickert longitudinal scrapers, scum scrapers and other associated equipment to improve sludge settlement. AECOM is the design partner for the project.

IT innovations such as smart meters and cloud-based pipeline monitoring could hold the key to preventing water shortages.