Testing, Site Restoration and Start Up 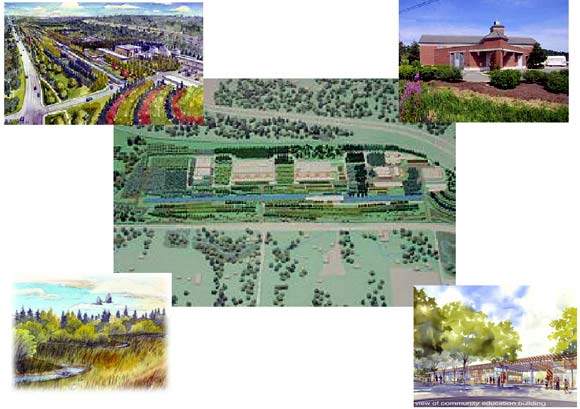 Schematic of the new conveyance system which, together with a new marine outfall and the plant itself, completes the project's programme of works. 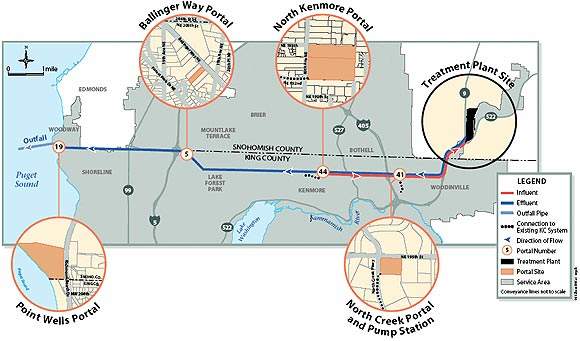 Project schematic. Wastewater treatment capacity has been identified as one of the key factors in the region's future economic development. 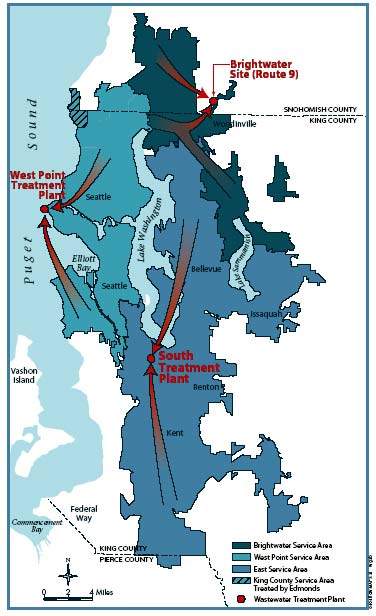 Map of King County service area. The population of the Puget Sound region has more than doubled since 1960. 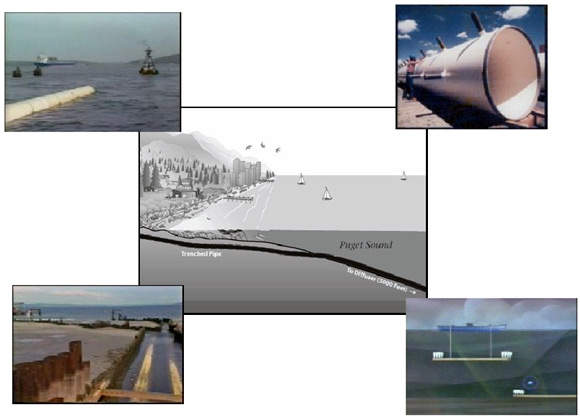 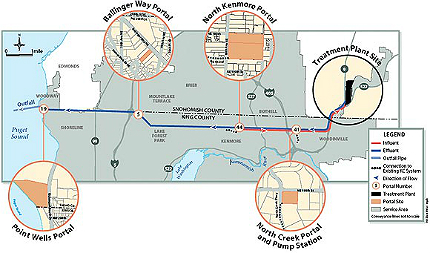 Construction of the new Brightwater wastewater treatment plant (WWTP) was originally scheduled to enter service in 2010. Delays in construction work postponed the plant opening to November 2012.

The plant’s construction began with preliminary demolition and clearance work on the 114-acre site in November 2005. The facility has an initial peak flow capacity of 495,000m³/day, which is expected to rise to a daily 645,000m³ by 2040.

It serves 189,000 people in the north King and south Snohomish counties near Seattle, Washington. The plant began operations in September 2011 and was fully operational in November 2012.

In addition to the new plant, the project required construction of a major conveyance pipeline system, together with a new marine outfall to discharge the treated effluent directly into the Puget Sound.

Construction of the 600ft deep outfall began in early 2008 and was completed during the same year. A major portion of the conveyance pipeline system is the Brightwater tunnel (BT), which was built in sections BT-1, BT-2, BT-3 and BT-4. Excavation work on BT-1 began in September 2007 and was completed in November 2008.

"The Brightwater WWTP serves 189,000 people in the north King and south Snohomish counties, near Seattle, Washington."

Construction on the four-mile BT-3 tunnel resumed in October 2010 after work was terminated in June 2009 due to a severe damage to the TBM.

Vinci Construction completed the installation of pipes within the tunnels in October 2012. The effluent started flowing in November 2012 and the plant’s average daily flow is approximately 90,850m³.

The population of the Puget Sound region has more than doubled in the last 40 years and projections of the continued growth indicated that the King County wastewater treatment system would have insufficient capacity by 2010.

"A major portion of the conveyance pipeline system is the Brightwater tunnel (BT)."

In November 1999, the Regional Wastewater Services Plan was approved and the process of identifying and evaluating potential sites, marine outfall zones, and construction methods for a new plant began the following year.

This ultimately led to the selection of the Route 9 site for the planned facility in December 2003 near Woodinville, with an associated conveyance pipeline along the border of King and Snohomish counties and an outfall off Point Wells.

With adequate wastewater treatment widely seen as one of the key factors in regional sustainable economic development, the Puget Sound Regional Council placed Brightwater on its top ten list of priority projects in 2004.

After a comprehensive series of environmental impact assessments and an extensive programme of public consultation, this site selection was formally reaffirmed in July 2005 and preliminary work began four months later.

Preliminary treatment of the influent is conventional, using mechanically cleaned screens for grit and waste removal, with both processes being covered and vented to minimise odour.

"Projections of the continued growth indicated that, by 2010, the King County wastewater treatment system would have insufficient capacity."

The primary treatment approach treats most of the inflow into the plant. It has a traditional design and consists of covered rectangular clarifier units, vented through an odour control system.

The secondary treatment process employs MBR technology as an alternative to the more conventional activated sludge method. This approach comprises 2mm fine screens to exclude any remaining debris and inorganic material, a set of bioreactor aeration basins, and the membrane tanks where the last stage ultra-filtration (UF) takes place.

The facility’s design has potential for up to 220 membrane cassettes, providing a final average daily capacity of 205,000m³ by 2040.

GE’s ZeeWeed MBR technology consists of a suspended growth biological reactor integrated with a UF membrane system and provides substantially better final effluent quality than conventional secondary treatment. The membranes are immersed within the aeration tank and bathed in the mixed liquor.

A pump then draws water through the UF membranes, while periodic, intermittent airflow is introduced at the bottom of the module to clean the surface of the membrane fibres.

This approach effectively overcomes the poor sludge settling, which is often characteristic of conventional activated sludge processes. It also allows for significantly higher mixed liquor solids concentrations, typically between 8,000mg/l and 10,000mg/l. The elevated biomass concentrations supported result in the highly effective removal of both soluble and particulate biodegradable material.

The combination of high-quality effluent and the system’s operational reliability were major drivers in the decision to adopt this technology.

During particularly high flows, provision is made to split the influent after the preliminary stage, with the excess undergoing an enhanced primary treatment before being recombined with the effluent from the MBR for disinfection with sodium hypochlorite and discharge to Puget Sound.

Stringent criteria have been established to ensure effective odour control, with King County having committed to a goal of no detectable odours beyond the site boundary. To achieve this, all process units are covered and the air collected is routed through the odour control system.

This comprises multistage chemical scrubbers, with a final carbon adsorption stage, which is also used to treat any digester gases discharged through pressure release vents.

Of the four classes of reclaimed water identified by the state of Washington, Class A is the most stringent. This may be used for non-potable industrial processes and irrigation.

The plant will initially offer a 20,000m³/d Class A water reclamation facility, with space reserved on-site for future expansion to a final daily production of 643,520m³.

King County has been successfully recycling biosolids for more than a quarter of a century, using it for applications in agriculture, forestry, landscaping, and gardening. Biosolids from the new plant undergo thickening, anaerobic digestion, and dewatering processes on-site, before being removed for beneficial off-site use in these established outlets.

As befits a major moder construction site, environmental concerns have been given great consideration.

"The final cost, however, was $1.8bn due to delays and inflation."

Rainwater running across the bare soil of construction sites can quickly pick up a variety of particles and pollutants, which inevitably then end up in local waterways, eroding the soil and increasing turbidity in the receiving waters. In an attempt to avoid this, silt fences, sediment traps, and check dams are often used.

Chemical treatments are also employed where building work sits alongside particularly sensitive watercourses, or when construction coincides with high seasonal rainfall; a situation that can create unique issues for stormwater management. Though effective, such chemical treatment is expensive.

To avoid this costly route and maximise both environmental and economic gains, the Brightwater site made use of forest filtration, allowing the site’s large undisturbed areas of trees and vegetation to treat the water runoff.

Storm water run-off from the southern end of the site was pumped to an installed sprayer system, which irrigates the forestry north of the site minimising the use of chemicals while still meeting the appropriate standards. Ground filtration itself is not a new idea, but it is not usually used on construction sites and seldom at this scale.

Cost of the Brightwater WWTP project

The cost of the MBR was initially expected to reach $30m, with a further $50m allocated for state-of-the-art odour control measures. The total construction cost was estimated at $280m, with an additional $88m reserved for landscaping and mitigation. However, the final cost was $1.8bn due to delays and inflation.

Key players involved in the project

Hoffman Construction was the general contractor and construction manager for the project, responsible for the liquids processing facilities,overall site management, and civil constructions.

The membrane system for secondary treatment was supplied by GE Water & Process Technologies.

The company joined sub-consultants including Brown and Caldwell and Mithun Architects + Designers + Planners for the plant’s design. The solids stream and odour control systems were provided by Kiewit-Pacific under a design-bid-build contract.

Grand Coulee is a gravity dam on the Columbia River in the US, which serves the purposes of irrigation, flood control and power generation.

Westside wastewater treatment plant, located near the Ohio River in Evansville, Indiana, US, was upgraded and equipped with a new biological aerated filtration (BAF) technology on 25 August 2009.

The future of water – Oracle Utilities talk conservation and innovation