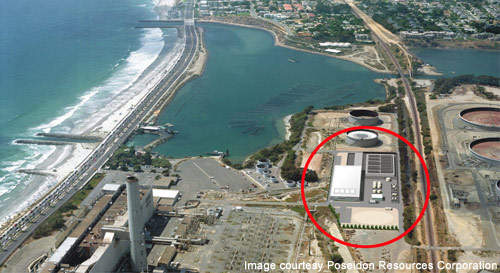 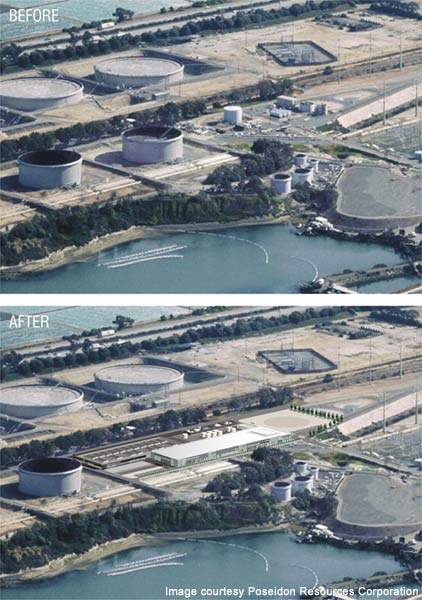 Carlsbad from the west – before and after construction. 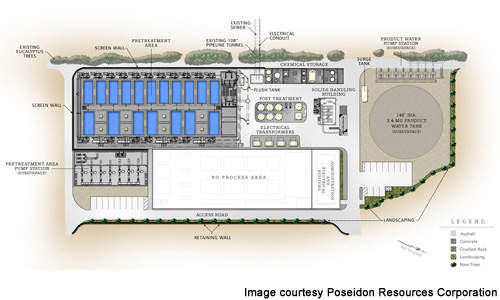 Artist's impression of the building that houses the reverse osmosis system, chemical storage and pumps for water treatment. 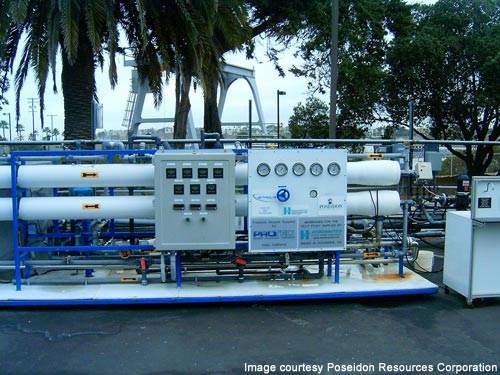 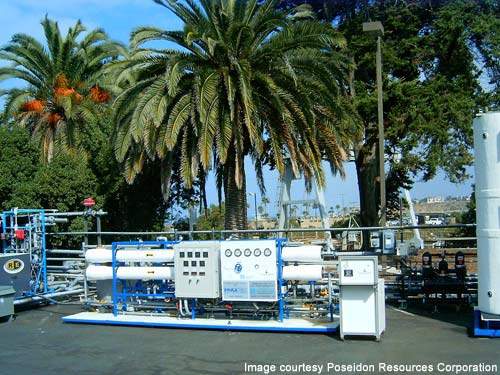 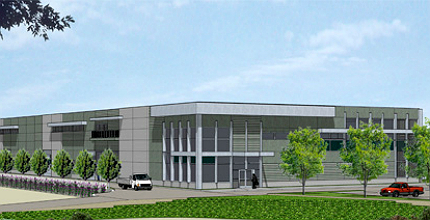 The project includes a desalination plant, a pumping station, product water storage and a ten-mile finished water conveyance pipeline.
Poseidon leased a four-acre site adjacent to the existing Encina Power Station site, owned by Cabrillo Power, for 60 years for the desalination plant. On the south of the plant site is the Agua Hedionda Lagoon of the Pacific Ocean.

The plant produces 50 million gallons of desalinated seawater (MGD) a day and provide 10% of the total drinking water needed by San Diego. It supplies 56,000 acre-feet (approximately 2,440 cubic feet) of water a year, sufficient for 300,000 people.

The water from this plant is purchased by the Carlsbad water agencies, and is supplemented with imported water from San Diego County Water Authority (SDCWA), the region’s water supplier.

Bidding for EPC of the project was made in February 2006 and the contract awarded in 2007.

In 2008, the plant received approvals from the State Lands Commission and the California Coastal Commission. In May 2009, the Regional Water Quality Control Board approved the plant’s construction. In September 2009, the city of Carlsbad approved the desalination project with minor changes to the main plant building and pipeline network to the certified EIR.

Construction of the first phase of the Carlsbad desalination plant started in November 2009.

In January 2010, the project was allocated $530m in private activity bonds (PABs) by the California Debt Limitation Allocation Committee (CDLAC). Financing for the project was closed in December 2012 to clear the way for the start of construction.

The plant generated 2,300 jobs during the construction phase and 575 jobs during operation. It began supplying desalinated water in December 2015.

The Carlsbad desalination project was developed as a public-private partnership between local utilities and municipalities in San Diego County and Poseidon Resources. Poseidon has 30-year contracts, with an option for an extension, for long-term, fixed-price water purchase from nine public water agencies in San Diego.

Engineering, procurement and construction (EPC) contracts for the first phase of the project were awarded to American Water, JR Filanc Construction Company, PBS&J, Acciona Agua and its partners. Poseidon selected Barclays Capital as the financial adviser for the Carlsbad desalination project in June 2009.

The engineering, procurement and construction (EPC) contracts for the second phase of the project were awarded to the joint venture (JV) of Kiewit Shea Desalination. The JV comprises Kiewit Corporation and J.F. Shea Construction. The seawater process plant was designed by IDE Technologies in collaboration with the JV.

Operation and maintenance (O&M) of the plant is being carried out by IDE Technologies for a period of 30 years.

Need for the Carlsbad desalination plant

Approximately 30% of the California state water project (SWP) goes to San Diego, but the county still imports 90% of its water from the Bay-Delta and the Colorado River. California has seen a prolonged drought, along with changes in its environmental pattern and population growth, meaning that tapering sources and stringent water treatment requirements are increasing the cost of traditional water sources.

The Carlsbad desalination project aims to provide a local source of potable water with an increased quality level (between 250mg and 350mg) and reliability by using economically feasible technology.

In 1998, the Carlsbad officials in San Diego teamed up with Poseidon Resources to secure a sustainable future water supply in the region. The public-private-partnership has since then been working towards construction of the 50MGD plant.

The Carlsbad desalination plant underwent ten years of planning and was in California’s permitting process for five years, until the Carlsbad Municipal Water District signed a water purchase agreement with Poseidon in September 2004.

The plant was proposed in 1998 and faced several hurdles before it gained all the required official approvals that delayed the construction. A total of 14 cases were filed against the project between 2006 and 2009. Most of these cases were filed by Surfrider Foundation (San Diego Chapters) and Coastkeeper.

Some of the hurdles included desertion by the San Diego County Water Authority in July 2006, a petition against the project’s brine discharge by environmental groups in 2007 and opposition regarding energy, climate and marine impacts.

A lawsuit was filed in April 2010 against the San Diego Regional Water Quality Control Board by the Surfrider Foundation. The foundation challenged the board’s approval to withdraw seawater (300 million gallons a day) for the desalination plant.

The California Superior Court, however, upheld its approval to construct the plant in June 2011. This led to an end of legal challenges filed against the project.

Design of the Californian desalination plant

The desalination plant construction involved demolishing the fuel storage tank of the power plant, which was not in use. The building houses the reverse osmosis (RO) system, chemical storage and pumps for water treatment and product water.

To obtain permission from the city of Carlsbad, the design of the building was rotated, a proposed on-site underground pipeline and off-site pipelines routes were finalised. The new pipeline routes are 1.2 miles shorter than the original proposal pipeline of 17 miles. The pipe diameter of the delivery system is in the range of 24in in the downstream portions and 48 inches in the upstream portions.
The plant’s compact design reduces its physical footprint. It was built following LEED programme guidelines and is fully automated to reduce its impact on the environment.

About 80% of the pipes for the plant were made of high-density polyethylene (HDPE) and fibreglass-reinforced plastic (FRP) materials for energy-saving seawater conveyance.

Pre-treatment of the water uses either granular media filtration or membrane filtration technology, along with a micro-screen filtration process. A chemically enhanced backwash of the pre-treatment membranes is conducted every day using acid, chlorine and base conditioning of membrane modules.

The solution is treated before disposal at the Encina Water Pollution Control Facility (EWPCF).

"The Carlsbad desalination plant underwent ten years of planning and was in California’s permitting process for five years."

Seawater from the Encina power plant, used for cooling boilers in operation, is diverted to the desalination facility through an existing cooling water discharge system. The source water is pre-treated and processed using RO membranes for producing the drinking water. The treated water is temporarily stored in on-site facilities before its transmission to the regional distribution systems.

The 13 high-speed RO feed pumps (one for each RO treatment train) enable the water and salt separation. They also have energy-efficient shafts. The reverse osmosis membrane was manufactured completely within San Diego County.

The water from the RO system is disinfected using chloramination, the process of adding chlorine and ammonia. The biological growth in transmission pipelines and the reservoirs of the distribution system is controlled by forming chloramines in the water. Further, the water is chloraminated with the application of ammonia and sodium hypochlorite.

The water at the delivery level has a chloramine residual concentration in the range of 2mg/l to 2.5mg/l. The produced water is conditioned with carbon dioxide and lime to avoid corrosion of the delivery facilities with the product water. Water from the RO system is pumped to the off-site water distribution system.

One gallon of potable water of water produced in the RO membrane separation process produces a gallon of concentrate. The concentrate is twice as saline as seawater (67,000ppm). The water is conveyed to the cooling water discharge canal of the power plant.

The concentrate is blended with the cooling water of the power plant before being discharged in to the Pacific Ocean through the power plant’s discharge canal. All the membranes of the RO train are cleaned twice a year to remove the accumulated fouling materials and particulates.

The Carlsbad plant conserves local and regional water and complements the recycling programmes. The project also dedicates 15 acres of lagoon and oceanfront for improving public access and recreation. The project enhances, restores and maintains the marine environment.

The Fillmore Wastewater Treatment Plant (WWTP) is a state-of-the-art, zero-discharge water recycling facility (WRF) located in the City of Fillmore in the state of California, US.

The Eastside Reservoir is built in the saddle of two mountains and located in the Domenigoni, or Diamond valleys, in Riverside County about 90 miles (145km) southeast of Los Angeles, California, US.