Population to be Served

The Doha North Sewage Treatment Works project is being carried out in four phases. Image courtesy of Doka. 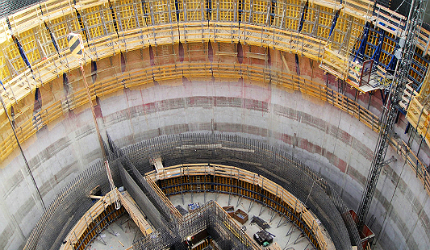 The project site is located about 25km north of Doha. Construction works for the project commenced in February 2008.

Treated wastewater from the project site is utilised for irrigation and other non-potable purposes, while the sludge from the treatment plant is used as soil conditioner in the neighbouring agricultural fields and as a source of green energy.

The project primarily serves the city of Doha and its neighbouring suburbs, comprising Umm Salal, Gharafa, Semiesma and Lusail.

Phase one of the project involved the construction of a PS70 pumping station located at Al Kheesa, pumping mains and other ancillary works. PS70 has a capacity to process 46,000m³ a day.

"Treated wastewater from the project site is utilised for irrigation and other non potable purposes."

It also included the construction of the main complex of the sewage and sewerage lines by micro-tunnelling. The complex was micro-tunnelled at depths ranging from 25m to 34m. Concrete pipes measuring 2.4m in diameter and 32km in length were laid.

A pipeline measuring 45km in length and 1.6m in diameter was also laid from the pumping station to the wastewater treatment plant. A sewage pumping station for treated sewer effluent (TSE 3) was also built. The contract also included the construction of the connecting pipelines and mains.

"The project site is located 25km north of Doha. Construction works for the project commenced in February 2008."

The secondary treatment involves biological treatment using an anaerobic-anoxic-aerobic (AAA) method for the removal of organic material and nitrogen from the wastewater. The treatment process in this stage also includes clarification / sedimentation through the use of settling tanks.

Kepel Seghers was awarded with the design, build and operate contract for the first phase of the project in September 2007. The contract is worth QR3.6bn ($1.5bn).

Phase two of the project has been contracted to Vinci Construction Grands Projets, Entrepose Contracting and QDVC. This contract is valued at QR1.78bn ($489m).

Ultra Construction and Engineering is responsible for the construction of main complex of the sewage and sewerage lines. The contract is worth QR1.3bn ($352m).

Rotork is supplying its IQ Pro intelligent electric valve actuation technology to assist in the operations of the wastewater treatment plant. Mechanical and electrical installation works at the project site are being carried out by AMEM.

Formwork for the construction of various facilities at the project site was provided by Doka.

The XIGA UV membranes and standardised UV skids used by the treatment plant were provided by Norit X-Flow.

Two automatic bag packing and palletising systems used for conveying the treated sludge were supplied by Webster Griffin, who acted as a subcontractor to TSL Engineering. The contract is worth $800,000.

The aerobic digester and SAS balancing tank were built by the ITC Group. Construction management services for the project are being provided by Stanley Consultants.

Muscat wastewater project, which includes the construction of what is expected to be the largest membrane bioreactor (MBR) plant in the world, is an ambitious programme that will ultimately serve 90% of the city’s inhabitants by 2017.