Expected Completion of Phase I 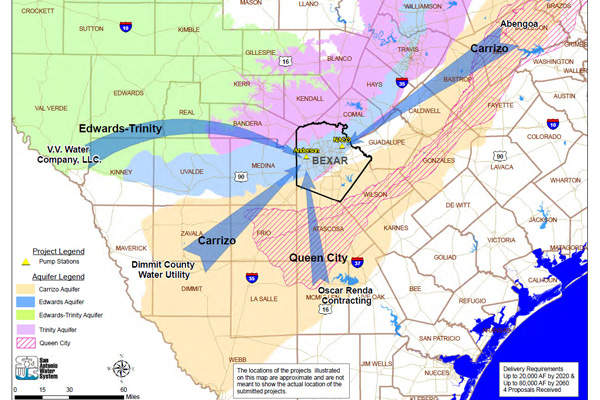 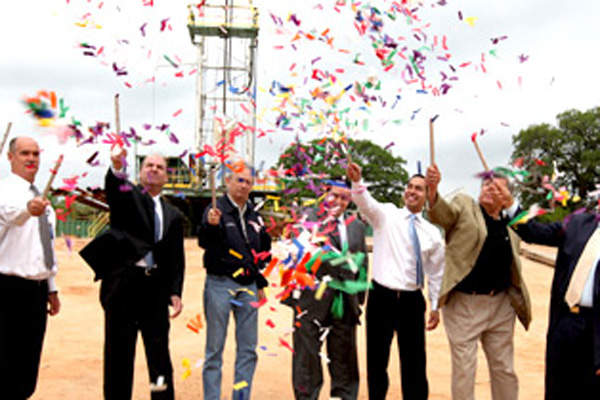 The ground breaking ceremony for the San Antonio brackish water desalination project was held in July 2014. 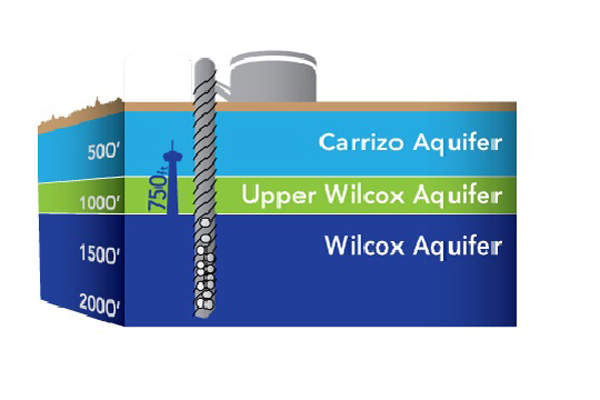 The brackish underground water desalination plant will treat water from the Wilcox Aquifer in its first phase. Image courtesy of CPS Energy.

San Antonio Water System (SAWS) broke ground for its brackish groundwater desalination (BGD) project in South Bexar County in the city of San Antonio, Texas, US, in July. Phase one of the project, slated for completion in 2016, will deliver a desalination plant capable of producing 12 million gallons of drinking water per day treating underwater salt water from the Wilcox Aquifer.

Completion of phases two and three of the project, expected in 2021 and 2026, respectively, will make it the largest inland desalination facility in the US with a production capacity of more than 30 million gallons of fresh water per day (mgd).

The total cost of the project, including that of land acquisition, feasibility, design and construction for all of the three phases, is estimated at $411.4m. SAWS has already collected more than $100m in low-interest loans from the Texas Water Development Board for the project.

The desalination project is being developed as part of the SAWS 2012 Water Management Plan, which aims to meet the city’s next 50-year water needs without relying much on the Edwards Aquifer.

Officials from San Antonio Water System (SAWS) have presented a draft purchase contract to the city community for purchasing the non-Edwards water supply for the US city.

San Antionio has large underground aquifers with highly saline water. The new BGD facility, located at the existing SAWS Twin Oaks Aquifer Storage and Recovery site, will transform the brackish water of the Carrizo and Wilcox aquifers into usable water for human and industrial consumption.

Phase one of the desalination plant will generate approximately 13,440 acre-feet of water per year, which will be sufficient to meet the water needs of approximately 40,000 families in San Antonio. Phase one, estimated to cost $192.7m, involves the construction of 13 raw water production wells, each running more than 1,500ft deep, as well as 11 miles of pipeline and associated pump stations, residual conveyance system, three deep injection wells for disposing concentrate, a reverse osmosis (RO) water treatment plant (WTP), and a 7.5mgd finished water storage reservoir.

Other facilities at the plant will include chemical treatment systems, supervisory and data acquisition controls, an administration building, and a housing pilot plant and training facility.

The SAWS brackish groundwater desalination plant will use membrane reverse osmosis process to treat saline ground water containing dissolved solids in the range of 1.30mg to 1,500mg per litre.

"Phase one of the desalination plant will generate approximately 13,440 acre-feet of water per year, which will meet the water needs of approximately 40,000 families in San Antonio."

The pumped brackish ground water will be pushed at high-pressure through a semi-permeable membrane with pores of 1/100,000th the diameter of human hair, by which fresh water will be diffused through the membrane leaving behind the highly concentrated salty water.

Every ten gallons of brackish water treated will result in nine gallons of drinking water similar in taste as the Edwards Aquifer water, which will be blended with the water from the new plant before being supplied to the San Antonio residents.

The salts and minerals that are removed after treatment will be injected back deep into the ground where existing salt concentrations are even higher.

A joint venture comprised of Zachry and Parsons was appointed as the construction manager at-risk (CMAR) for the desalination project in December 2012 under an $86m contract that includes pre-construction collaborations, construction of plant components and operations and maintenance (O&M) of the plant for six months.

Black & Veatch was awarded the design contract for the project in January 2013, while a group of companies including Tetra Tech, LBG Guyton, URS and GAI are involved as design sub-consultants for different aspects of the project, including the water plant, system controls, brackish wells, raw water pipelines, concentrate pipelines and deep injection wells.

Encotech provided electrical engineering services for the pre-design phase of the brackish water desalination project and Carollo conducted the pilot RO testing for the project.